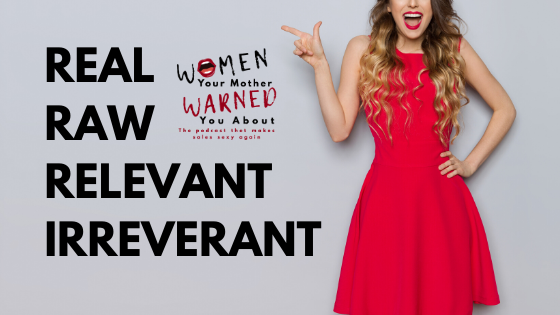 We’d be lying if we said we’d be surprised to see our name splashed across the marquee of some theater who’s hosting a one-night-only burlesque show featuring Valentina J’Adore, a woman who can mix a martini with her cleavage.

Our name is catchy and as co hosts Rachel Pitts and Gina Trimarco discussed, provocative. The provoking-controversial-arousing sexual interest provocative, not the annoying-irritating provocative. That might be a matter of opinion but here at Women Your Mother Warned You About we’re pretty damn comfortable with who we are as women and even more proud of the product we put out so yeah, we’re the provoking-controversial-arousing sexual interest provocative.

So what’s the first step in defining and becoming a woman your mother warned you about? According to Gina, “first you need to know who you are. Know it, then own it, then hone it.”  And she was very clear in it doesn’t mean you have to be like herself, or Rachel, or any of the guests they have on their show for that matter. It’s about being 100% your authentic self and embracing everything about you, your strengths and your weaknesses.

Basically step one is, BE REAL.

Once you’re unapologetically you, it’s about being comfortable with being uncomfortable because if you’re weird, if you’re different, if you’re doing things other people wish they were doing then you should prepare to face judgment. Rachel compares the modern day woman your mother warned you about to the witches of the Salem Witch Trials, and not just because there’s nothing more uncomfortable than being burned alive. “They were women that were doing things that were outside of the box of what was comfortable for the rest of the villagers. If you really research it, they were Women Your Mother Warned You About. They were doing shit that people said ‘that ain’t normal’. We got to get rid of her before all the other women see that they can be different too.”

Which means step two is BE RAW.

And in keeping on brand, step three would be, BE RELEVANT.

So how do you know you’re staying relevant? In Rachel’s words “when the haters show up.” You’re you, and you’re comfortable facing judgement but that doesn’t mean you always have to be bulletproof. Words hurt and it’s hard not to get bogged down by the insensitivities of your critics but if you interpret the shade they’re throwing your way to mean “that you’re doing something that’s making enough of an impact for people to notice” you’ll have a much easier time processing that pain. Word on the street is that some big name artists and celebrities go so far as to hire haters just so their fans are prompted to come to their defense. Don’t believe us? Check out the comment feed of a Beyoncé music video or search the #kanyewestisover hashtag on Twitter. How else does a feud that originated ELEVEN YEARS AGO stay current?

We’re not saying you HAVE to say fuck on your podcast or try to share a sleeping mat with a boy in kindergarten but those are definitely prime examples of how to get labeled as a WOMAN YOUR MOTHER WARNED YOU ABOUT. What the hell are we talking about? Check out Episode 67 for all the details.