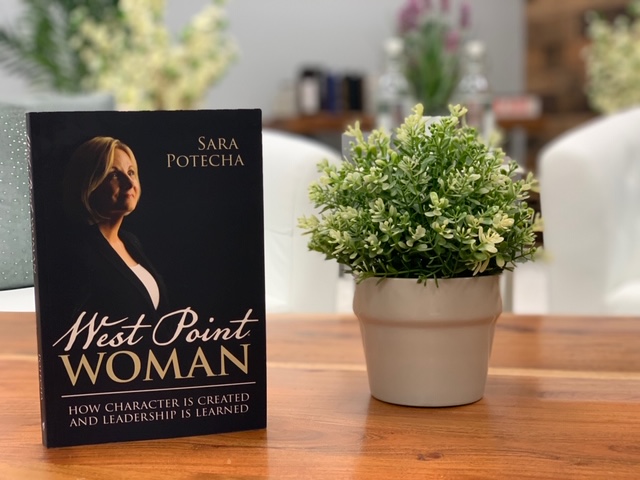 One of the first women to graduate from West Point Military Academy. An accomplished author, speaker and consultant who has led cultural transformation initiatives for Fortune 100 and 200 companies. Has coached hundreds of leaders to higher levels of performance.

And yet, not afraid to tell a hilarious yet self-deprecating story about getting caught with her fly down while marching in a parade in front of upperclassmen and dignitaries, including famous five star Army General Omar Bradley.

It’s no wonder that co hosts Gina Trimarco and Rachel Pitts were so eager to have Sara Potecha on this weeks’ episode of Women Your Mother Warned You About.

So how does a woman at  5’2” and roughly 100 lbs end up quite literally “slashing and smashing” her way through a male dominated military academy?

She cites her parents passion for education and her father’s encouraging words, “Sara, it’ll be a unique experience for a woman.”

Desperately wanting to go to a good school but not having the money for the Ivy Leagues she explored national service academies, and was immediately accepted into West Point.  “I kind of fell in love with the place because they stood for something. They talked about service to country. They had an honor code, which was important to me.”

It was in seeking a means to an end that Sara was able to serve her country and “have some of the greatest leadership experiences you could possibly have by being in all parts of the world and doing things you never thought you would dream of.”

Being a West Point cadet was challenging to say the least. There were the physical challenges of long distance running, pull ups and lots of push ups while managing all the military requirements. Then there’s the academic challenges of being amongst valedictorians, salutatorians and even enlisted soldiers with prior service while carrying an average of 18 and a half credit hours. But being one of the only women came with a special set of challenges since the national service academies had only recently begun accepting females into its ranks.  “We kept losing women. So there were fewer and fewer women that you could have any support from. I went a whole semester with no roommate at all [because] they had all left so there was the idea too of the loneliness.” Many challenges came in the form of female upperclassmen who had a chip on their shoulder due to previous conditions and requirements; like being forced to attend ‘military makeup classes’ to safeguard their femininity.

It was all of these moments however that allowed Sara to discover that she was capable of much more than she originally knew and as she says “when the going got tough, the tough got going.”

She would enter the corporate world with a breadth of experience that people aren’t necessarily accustomed to seeing. After reviewing her resumé one employer even asked “how old are you anyway?”

So what does a woman who at 23 or 24 had 300 soldiers under her command do now?  Pretty much whatever she wants.

Sara puts it this way, “if I want to go and accomplish something, I will figure out how to make that happen.”

Like writing her book, ‘West Point Woman’, where she ‘delves into fundamental leadership precepts taught to her…at the United States Military Academy [and] captures audiences through powerful, and often hilarious, personal stories while teaching her readers how to cultivate the character within.’

And being a single mother of two girls where she learned to rest expectations of herself and delegate, “I’m not afraid to ask for help.” Sara suggests surrounding yourself with the right people and to always ask yourself “who are you trying to do this for? The important thing is you go back to your deep set values and are your deep set values to push yourself to such an extreme that you’re not good for the people that are relying on you.”

Sara encourages you to take time for yourself, embrace everything that you are, and to ‘show up’ because “no matter what the situation is, because [you] show up, [you’re] making a difference.”

Don’t we all wish we were soldiers under Sara’s command?

For more on Sara Potecha and her book West Point Woman visit WestPointWoman.com or find it on Amazon.